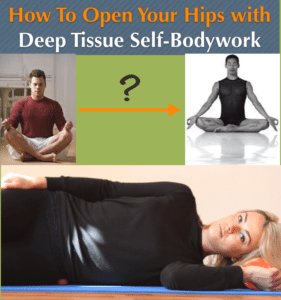 How often do you see people meditating in this posture? 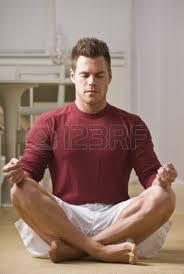 After reading this article, you will learn the following:

– Why this posture could be counterproductive for your meditation and dangerous for your knees.

– How to release myofascial structures that prevent thighs and knees from comfortably resting on the ground, so that your posture looks more like this: 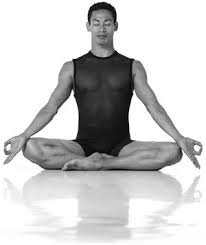 First, let’s see what happens posturally. Notice how far the knees are away from the floor: 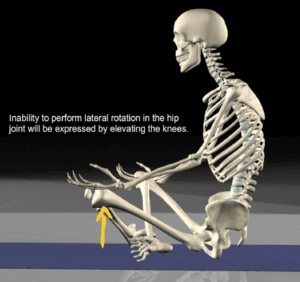 Moreover, this forces misalignment in the knee joint and may predispose to knee injury.

Position of the knees forces pelvis into posterior tilt: 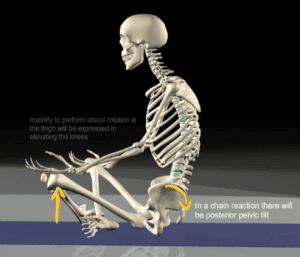 which in turn slouches the back: 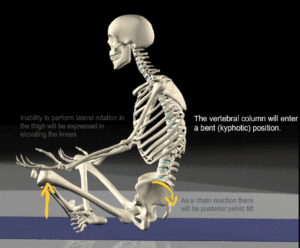 Slouched back makes big spinal muscles tight and forces head to move forward tightening muscles in the back of the neck. Muscles of the neck and back are oftetimes tight and full of trigger points due to many of us spending hours a day staring at computer screen. Tight muscles make us uncomfortable and overstimulate nervous system negatively affecting our sleep and making us more anxious and stressed.

Why would anybody want to meditate, trying to relax one’s mind, while at the same time making the mind more anxious by tightening up muscles?

To support this poor structure, hip flexors and abdominal muscles have to be engaged: 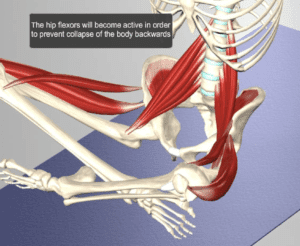 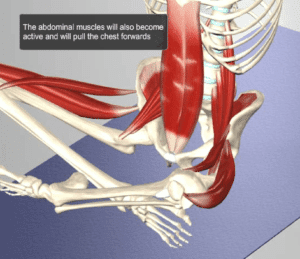 Frustrated with the knees being far away from the floor, some practitioners try to force the knees towards the floor hoping this would stretch muscles preventing the movement. This is counterproductive and puts even more strain on the knee joint.

To understand what kind of intervention may help us to resolve this, we will follow anatomical approach and analyze what myofascial structures could be restricting the movement. We will then offer self-bodywork exercises to release these muscles. 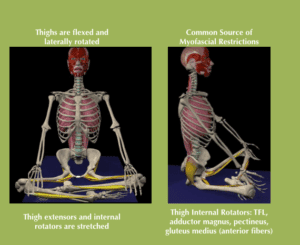 Before attempting any kind of self-bodywork using tools, it is absolutely essential to develop sensitivity in the fingertips of the myofascial structures we are going to work on. Therefore, lets start from self-palpation  of hip bone, TFL and Gluteus medius.

The upper ridges of the pelvic girdle is commonly referred to as the “hips”.  However, it should be noted that the anatomical hip joint is actually formed by the attachment of the femur to the pelvis – located closer to the greater trochanter than the “hip crest” or iliac crest.

Place your hands on either sides of your “hips” with the ridge of the “hip crest” (iliac crest) lying between your thumbs and fingertips.  Feel along the crest towards the front until  you ultimately fall off at the bony protrusion known as the anterior superior iliac spine (ASIS). 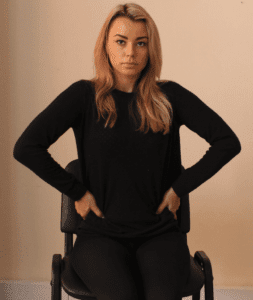 Next, follow the crest towards the back.  You should feel, more subtly, two protrusions known as the posterior superior iliac spine (PSIS) before coming upon the sacrum at the center.  The PSIS is also the region of the “back dimples” that are visible on some people. 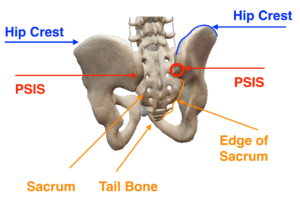 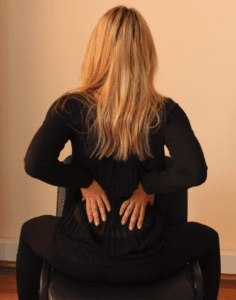 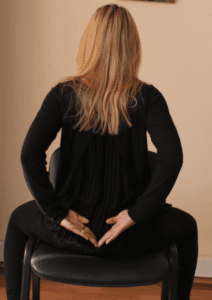 The sacrum is a triangular bone at the base of your spine, made up of five fused spinal segments with with your tailbone (coccyx) at the tip.

Self Palpation: TFL and Gluteus Medius

The TFL is a small muscle that attaches to the IT band and functions primarily as a hip flexor, resting just to the front of the outer hip.  The gluteus medius is a larger flat muscle that rests underneath the top of the IT band and is responsible for lifting the leg out to the side or keeping our pelvis level when standing on one leg. 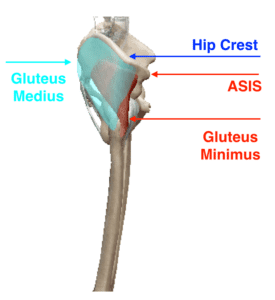 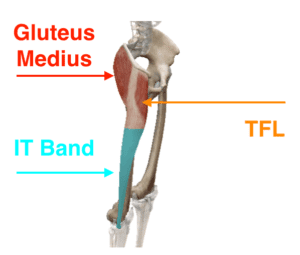 To palpate these muscles, place one hand at the side of your hip between your hip crest (iliac crest) and greater trochanter.  Place your other hand just to the outside of your ASIS, near where you would place your hand to enter your front pocket. To contract the gluteus medius, lift your leg out to the side (abduct).  You will feel the muscle tighten under the hand at your side. 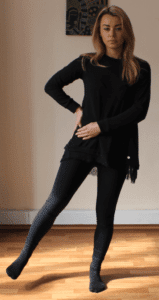 To contract the TFL, turn your knee inward (internally rotate) and feel the muscle tighten under the front hand.

Perform these movements several times, swinging your leg inward and outward and feel the two muscles activating alternately, allowing you to differentiate them. 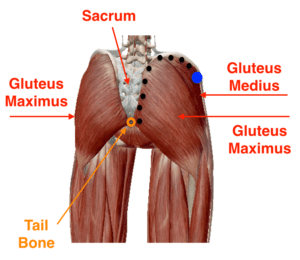 To address these muscles, we will first begin with the TFL and then gradually work backwards along the iliac crest to target the

attachments of the gluteus medius and maximus.   Begin lying on your side with your head supported on a Foam Support or pillow.  Flex your lower hip, bringing the thigh almost perpendicular to the trunk.  Position the third smallest ball from the Myofascial 5-pack just below and to the outside of your ASIS.

Confirm the proper positioning of the ball by slowly lifting the lower knee of the ground while maintaining the foot on the ground.  This internal rotation motion should activate the TFL.

Take a couple deep slow breaths while drawing for attention to the tissues around the ball.  Feel for a release and relaxation.  Gradually shift the ball to a new spot, tracing just below the hip crest or iliac crest.

As the ball shifts towards the back, you will eventually transition to lying on your back with your knees bent.  Continue to shift the ball down along the edge of your sacrum towards the tailbone.  At any time, feel free to change the size of the ball to adjust the desired level of intensity.

Now test your easy pose and see if you have easier time externally rotating thighs.

Where Can We Send Your Coupon

Retrieving your coupon and sending email...