Rescuing Your Rhomboids: Unsung Heroes of the Upper Back

We all know that guy who discretely carries the team with his quiet but consistent performance every week but doesn’t ask for much acknowledgement in return. Many people associate a higher profile muscle like the trapezius with the upper back and shoulders, but the rhomboids play a vital role in stabilizing the scapula and maintaining ideal alignment in the upper back. 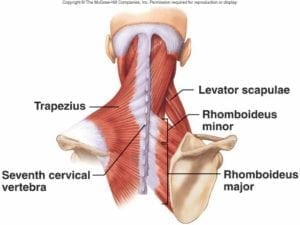 There are actually two muscles that make up the rhomboids as a whole—rhomboideus major and rhomboideus minor. Minor runs from the last cervical vertebrae to the first thoracic vertebrae, while major runs from the second thoracic vertebrae to the fifth. Both muscles connect to the inner edge of the shoulder blade, which means they are responsible for scapular adduction (think rowing, deadlifting or any action where your shoulder blades are drawn together). The rhomboids also hold the scapula against the thoracic wall, which is probably not something you think a lot about but is just as important structurally.

The rhomboids are somewhat covered by the more superficial trapezius, which may be part of the reason they get overlooked. We often feel tightness or soreness closer to our neck or on the top of the shoulders and so that is where we focus our attention. But what about slightly lower on the back itself? It’s more difficult to access with our own hands, and sometimes we stop short of investigating these tissues. 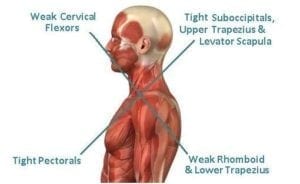 If we are seated at a desk for long periods of time or have a kyphotic posture (rounded shoulders and upper back), this causes the pectoralis muscles to shorten. The rhomboids can go into overdrive to compensate for the corresponding tightness in the upper trapezius and levator scapula. This leaves the rhomboids fatigued, overstretched, and often full of trigger points. If the chest muscles are shortened, it is important to release them first—if you release the upper back further without lengthening the front, you’re only exaggerating the problem further. Check out the post about releasing the chest here.

Once you’ve released the chest so that the pectoralis muscles can lengthen, you’re ready to give the unsung heroes the attention they deserve.  Some people are acutely aware of tension in this area. Trigger points in the rhomboids refer to the inner edge of the shoulder blade and feel like a dull aching pain that is closer to the scapula than to the spine. However, most people are surprised at the tightness they find in the rhomboids when given the opportunity to explore. You can easily release tightness in the rhomboids by placing a small ball between your spine and the inner edge of your shoulder blade. Using the floor or a wall, allow the pressure of the ball on your tissues to begin to restore your rhomboids to their ideal state. A video for upper back release with a small ball can be found here.

First step: breaking up adhesions and restoring tissue health. Second step: strengthening the rhomboids with exercises like the Reverse Fly and Seated Rows so that they’re not so overstretched and can more effectively counterbalance with the rest of the upper back and chest. There’s no stopping you now!